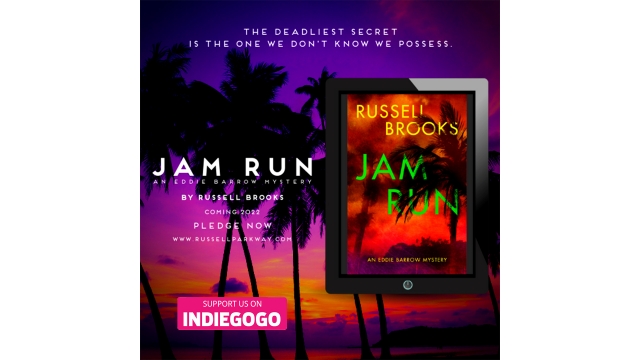 Passionate about social justice, thriller author Russell Brooks is launching his brand new book, JAM RUN, on Indiegogo where he hopes to raise $20000 to offset publishing and promotion costs. The book is set to be released around June 2022, available online and is expected to become a big hit with fans who love stories with conspiracies, murder, betrayal, and revenge.

More information on the crowdfunding campaign can be found here: https://igg.me/at/JamRun

This is the fifth book Brooks has authored and will be the second in the Eddie Barrow series. The book was written with the aim in mind to respond to the lack of thrillers with predominantly Black Caribbean characters. It will also fill a void where there are too few novels about Black Caribbean LGBTQ hate and sex crime social justice issues. There is also particular excitement about this launch because the book will feature the return of Eddie Barrow and his friend Corey Stephenson from one of Brooks’s earlier books, CHILL RUN, as they’re roped into finding the culprit behind a savage murder they witnessed within hours of arriving in Montego Bay.

JAM RUN sets its main focus on how anti-LGBTQ laws that discriminate against a community harm society. Readers will likely find a particular interest in the story because it focuses on Caribbean culture. But even more interesting is that the book is written by an author of Barbadian descent. The book’s cover art was created by Jeroen ten Berge and Jam Run is being independently published by Russell Brooks.

Russell Brooks is a former Canadian track and field team member with a degree in Biology from Indiana University in Bloomington, IN. He also has a background in insurance and finance. However, what helped shape the creation of the book is his passion for social justice–especially for people and communities within larger societies who’ve been rendered powerless either by discriminatory laws or by systemic discrimination.

When asked about why he wrote the book, Brooks said that it allowed him to write about subject matter that he’s passionate about while continuing a series. Writing a story with LGBTQ hate and sex crime plots and subplots is something that he’s wanted to do for a long time.

Brooks has hopes that the book will open the door for other Black thriller authors who are either born in the Caribbean or who are of Caribbean descent. “It’s important that we be given a chance to break into an industry that has traditionally favored white authors of the same genre,” said Brooks.

This positive outlook from the author is certainly a testament to his optimism considering some of the mishaps during its creation. At one point he had to cancel his trip to Montego Bay due to Covid-19. His goal was to visit the locations where JAM RUN takes place to write a more factually correct story. Fortunately, his friend Norris Douglas–the CEO of Real Tours Jamaica–who was supposed to be his guide, used his free time to communicate with him via ZOOM on weekends. “Norris was the best person to consult with on this project with regards to the Jamaican content. His first-hand knowledge of Jamaican Patois, cuisine, and the areas where the story takes place is what made him an important asset,” said Brooks.

In a recent interview, the author made a point of thanking his editor Lisa Dawn Martinez, Jeroen ten Berge who designed the book cover, Norris and Samantha Douglas who assisted in fact-checking the Jamaican content, and Signe Nichols who’s always produced his books in both eBook and paperback formats. Furthermore, he also wants to thank journalist and author Carolyne Van Der Meer who coached him on media relations, and Preston Martelly who assisted him in redesigning his website and getting it properly ranked.

Those interested in learning more about the book can visit here: https://russellparkway.com